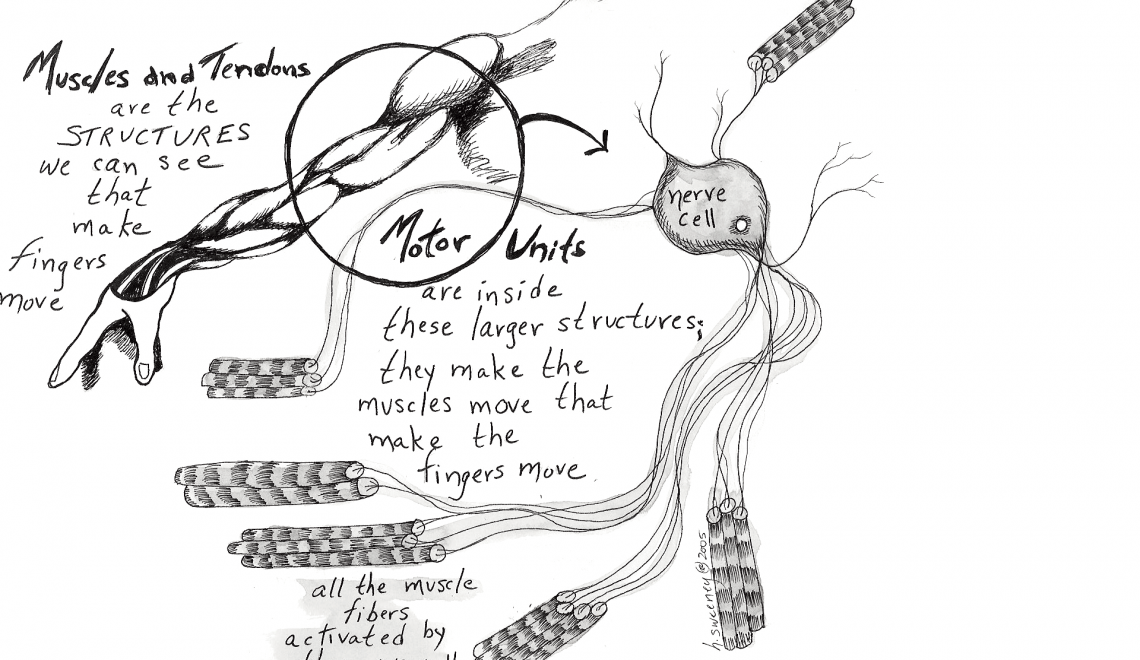 Practice continuously and without interruption

Written and illustrated by Holly Sweeney

Smooth continuous movement is probably the most recognizable characteristic of traditional Yang Style Tai Chi Chuan. Anyone who has ever witnessed Yang style Tai Chi players remembers this distinctive quality of their practice.

What is the benefit of “practice continuously and without interruption” from a scientific viewpoint? There are unique results that occur as a result of applying this principle from the Ten Essentials. Slow, smooth, continuous movement produces at least two special conditioning effects for nerves, muscles, and tendons. To understand the conditioning that occurs, we first have to learn about the functional properties of nerves, muscles, and tendons.

FUNCTIONALLY, a “muscle” represents a group of “motor units”.

A motor unit is one nerve cell, or neuron, and all the muscle fibers which it activates. (Figure 1) This is not the same as muscle structures that we see in anatomy books and that have familiar names like “biceps, triceps, quadriceps.” We cannot see a motor unit. However, any movement, large or small, weak or powerful, happens because motor units are called into action. When a motor unit activates, it is called “recruitment.”

“RECRUITMENT” means the excitement of a nerve and all the muscle fibers it activates.

Motor units vary according to the ratio of muscle fibers to each nerve cell. If there are just a few muscle fibers activated by one nerve cell, that kind of motor unit will be found in an area of the body where precise and controlled tasks are performed, like our hands. For instance, a motor unit in our hands could have one nerve that activates 12 muscle fibers, (a low ratio of 1/12) because our hands have to perform intricate tasks. With so few fibers to each nerve cell, there will be many motor units in our hands compared to say our thighs. In our thighs, we could have a motor unit with one nerve activating 2,000 muscle fibers, (a high ratio of 1/2,000), because power rather than precision is the main job for that part of our bodies. Generally, the ratio of nerve to muscle fibers in a motor unit varies according to the demands that are placed on the area of the body where that motor unit exists. For instance, a tap dancer will have more motor units in his feet and legs than the average person because he places more demand for precision on that part of his body than the average person.

The tap dancer’s increased number of motor units is an example of the way our bodies adapt to the demands we place on them. These adaptations will occur throughout our lives. In scientific language, this adaptation to demand is named “conditioning” or “training effect”.

Being able to move smoothly with as little or as much force as we wish to apply is quite a feat given the fact that muscle fibers are “all or nothing”. This means that when a motor unit is recruited, the muscle fibers in that unit contract, all the way, as hard as they can. So, how do we ever manage to control the way we move? There are two ways this is accomplished.

One way is that our brain can adjust the rate at which impulses arrive to stimulate our motor units. To sustain a movement, like we do when we hold a posture, a steady stream of nerve pulses must arrive to our motor units to keep the muscle fibers from relaxing between impulses. This works until the muscle fibers fatigue. Imagine a symphony conductor who is directing a whole orchestra of motor units. The conductor is tapping his baton in the air to indicate a continuous pulse in a particular section of the orchestra. The sound coming from this section would seem to be continuous until the motor units began to fatigue, then the sound would become shaky and disconnected. All of us have probably experienced this effect when we have held a Tai Chi posture for a long time and we feel a part of our body start to shake.

The other way we can make controlled continuous movement is by changing the number of motor units that are active at any one time. Muscle activity can be made smooth by making motor units recruit at different times. In this case, the symphony conductor would point his baton at one area of the orchestra and then another and then another in such a way that the sound would seem continuous and uninterrupted. While one section plays the other section rests for a moment but the sound is continuous. Sequential activation of motor units is an elegant solution for the problem of making smooth continuous movement because it prevents fatigue since some motor units can rest while other units work.

The practice of smooth, continuous, controlled movement demands that our bodies activate and maintain more motor units than quick or interrupted movement! This means that someone practicing Tai Chi is consistently activating more motor units per minute than a person playing, for example, tennis. This is a significant conditioning benefit, particularly when the normal process of aging is factored into the picture.

As we age, cells die and may or may not be replaced in our bodies. Nerve cells are part of this normal die-off. However, when a motor unit nerve cell dies, all the muscle fibers connected to it are rendered useless and will quickly atrophy unless those fibers are incorporated into another motor unit. Whether or not a new motor unit will be formed is largely dependent on demand. “Use it or lose it” is a wise axiom. If there is no demand for a motor unit, it will not be replaced. Our bodies are interested in efficiency; nothing is maintained unless it is needed for something.

Losing muscle mass and balance capabilities are well documented parts of the aging process. However, it is now understood that loss of motor units is a significant factor in both these age-related physical changes. It is now recognized that the most effective way to increase strength and balance in older adults is to practice activities that increase motor unit recruitment, which means that more motor units will be created and maintained. This is one of the reasons that Tai Chi has been proven to be so helpful in improving balance and strength in older populations. Tai Chi practice, with its emphasis on smooth continuous movement, demands the participation of many motor units throughout the body for prolonged periods of time. This requires that the body not only actively maintain existing motor units but create new ones to fulfill the demand! This is one of the most beneficial conditioning effects to be gained from practicing the Ten Essentials. What else does the principle “practice continuously and without interruption” do for us?

The other training benefit that we receive from practicing movements slowly and continuously has to do with our tendons. In order to make a movement, our muscles have to be attached to something. Tendons attach our muscles to our bones so that movement can occur at our joints. While muscles are “excitable” elastic tissues, meaning they actively change shape when stimulated by a nerve, tendons are “passive” elastic tissues, meaning they change shape when a pulling force acts on them.(Figure 2)

Tendons exhibit some of the most amazing biomechanical properties of any tissue in our bodies. For example, tendons have incredible tensile strength. “Tensile strength” means the ability to resist being pulled apart. A tendon can resist a pull of about 15,000 pounds. A muscle can resist only about a 30 pound pull before it tears apart. Also, tendons display different viscoelastic properties depending on how they are pulled. If the pull is even and continuous, tendons will “creep”, meaning slowly elongate. If the pull is sudden and abrupt, tendons will stiffen. This property of tendons is important to understand when we do stretching exercises. If we bounce our body weight into the stretch, our tendons will stiffen, exerting more pulling force on our muscles which can cause tears if the force is too great. If we do stretching exercises in a slow and gentle way, the tendons will elongate and our muscles will be protected from injury.

Another interesting property of tendons is their ability to store energy. Tendons can store about ten times more energy than steel and they are also very energy efficient – about 93% of the energy they store can be returned and used. In fact, the short term energy storage achieved by our tendons when we move around accounts for at least 50% of our bodies overall energy efficiency.

Tendons make the action of our muscles more powerful by storing the force of our muscle contractions. The slower the contraction, the more energy is transferred to the tendon. Therefore, the essential principle of continuous, uninterrupted movement performed at a slow rate of speed creates ideal conditions for maximum energy storage in our tendons which contributes greatly to our overall endurance and strength.

In summary, practicing Tai Chi Chuan with slow, smooth, flowing, uninterrupted movement provides a strong training effect for our bodies by stimulating our nervous systems to create and maintain high numbers of motor units and by exercising our tendons in a way that promotes elasticity and efficiency. 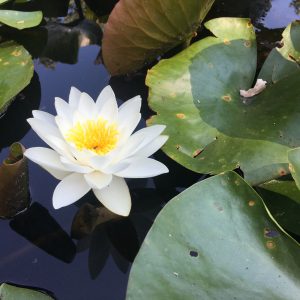